A Wild Hunt for a Unicorn

Before we start with the actual blog post we – Easha and Poppy together, regardless of the text colour – want to address a CIRIous topic first:

The dark Witcher world is not exactly a welcoming one. The oppression of different non-human races which are a minority in human cities, the constant discrimination or even violence they have to endure and the hatred it leads to are a reoccurring topic in that universe. Another one is the invasion of a foreign empire, which is conquering new lands and assimilating their culture, customs and enforcing new rights and laws upon them.
Luckily it is just a game, there is a distinct border between reality and fiction and getting out of this universe only needs one click.

It does not take much imagination to see the parallels in our world: The current events in America with the death of George Floyd – and the struggle of elves, dwarves and gnomes in the Witcher world. China’s new “Security Law “ for Hong Kong  – and the undermining of rights and customs by the new Nilfgaardian rulers after invading the North. Unlike the games, you cannot simply turn that off and get out of it with a simple mouse click.
But also unlike in the games which only feel alive but are ultimately stale and will not change once the game has ended, change can happen in the real word.
Do not waste this opportunity to join the voices of concern. Be aware and make people aware of those subjects. Cause change. Be the change.

On a little brighter, but still CIRIous subject: Happy Pride Month!
We know we are late to the party (that tends to happen when you only post once per month), but we still have more than a third of it ahead of us – and rainbow colours should be visible even better during this rather dark year of 2020 we had so far. Just in case you are wondering what this has to do with Gwent, we highly recommend having a closer look on Imke. You won’t find rainbow colours there, but we are sure you can figure out the card’s connection to Pride Month and we are glad that such a relationship exists within Gwent: The Witcher Card Game.

You can click the card names to see their premium versions.
All card art and premiums were taken from The Voice of Gwent.

If you skipped the paragraph above, please don’t! We will wait for you until you read it, don’t worry. Thank you in advance.

Of Towers and Unicorns

When you think about Unicorns in the Witcher, most people think about that one scene if you choose to romance Yennefer. But wait! There is more! You can even ride on – not quite real, but close enough – unicorns together with Syanna in the Land of a Thousand Fables. I want to ride a unicorn as well. I really wonder whether it is any different from riding a horse. Geralt should hope Roach did not get envious, as she is the most important woman in his life after all.

However, there are real unicorns in the Witcher universe. The most notable one would be Ihaurraquax, which was rescued by Ciri from a sand monster. Ciri’s yet undeveloped mastery over time and space and the unstable portal of Tor Lara (Elder Speech for “Tower of the Gull”) she used to escape Thanedd Island after the coup, transported her in the middle of the Korath desert. Tor Lara’s portal should actually lead to Tor Zirael (“Tower of the Swallow”) which leads us – unlike the unstable portal – directly to our next topic.

When Ciri attempted to travel back from Tor Zirael to Tor Lara some time later, the portal malfunctioned once again. You might ask whether she shouldn’t have known better by now, but she was desperate to escape the bounty hunter Leo Bonhart. Ultimately, she ended up not in a distant place of her own world, but in an entirely different world inhabited by the Aen Elle (“People of the Alder”). Unlike their brethren, the Aen Elle (“Pople of the Hills”), those elves left the Continent ages ago and conquered a different world to settle in. In their world they are at war with the unicorns, because they exploited their ability to traverse time and space and forced the noble creatures to open portals between worlds for them. I would like to point out that our unicorn is not forced to be our mascot and no unicorns were harmed during the creation of this blog.

I hope I did not bore you with all the lore, but it was necessary to understand the following part. I will leave it to Easha, as I really can’t look at this card for too long. Such cruelty…

Fantastic Beasts and How to Kill Them

Unlike our unicorn, the one depicted here certainly was harmed by the Aen Elle Conqueror. He does look like a conqueror, perhaps even of the world shown in the background. A shout of triumph on his lips, his defeated opponent underneath his boot and the unicorn’s horn – the very essence of what defines its being; not only by name, but also visually – as a trophy in his hand, still streaming with blood as it has just been cut from its head. This also means basically disarming the Aen Elle’s opponent, a unicorn horn is a quite lethal weapon after all: “A wound from the horn of a unicorn has no cure, not even magic.” as Eredin (an Aen Elle as well) tells Ciri in The Lady of the Lake. Not only the horn is dangerous, have a look at the unicorn’s build: Those leg muscles? You do not want to get hit by a kick from its hooves.
I wonder how the elf even got close to his prey. The landscape looks rather open and would make it difficult to corner the unicorn.
He was probably on horseback, even though his weapons indicate another option: An ambush using the javelin depicted in the foreground. It is definitely not a common spear, the thicker black parts are additional weights that stabilise a javelin mid-flight. It is also not sturdy enough for an anti-cavalry spear.

The deep cuts in the unicorn’s flank were not caused by the spear, but by the weapon in the hands of the Aen Elle Conquerer. It is hard to tell what weapon it is, as the handle is covered by his leg. If the last bit right above his boot is a sort of pommel, it would be more of an axe. If the handle reaches to the ground, it would be some sort of war scythe. My bets are on the latter, as the improved range would be helpful to stay outside the action radius of the unicorn’s hooves and horn. The blade is shaped like a khopesh – an old Egyptian sickle sword.
The Aen Elle seems unharmed, probably because almost every hit landed by the unicorn would have been outright lethal. The horn piercing the armour, or him getting downed and trampled under its hooves? He would not recover from such injuries  and thus he would be the one bleeding to death in the dust.

As we cannot give the leek we prepared to the unicorn anymore for obvious reasons, you can have it instead: 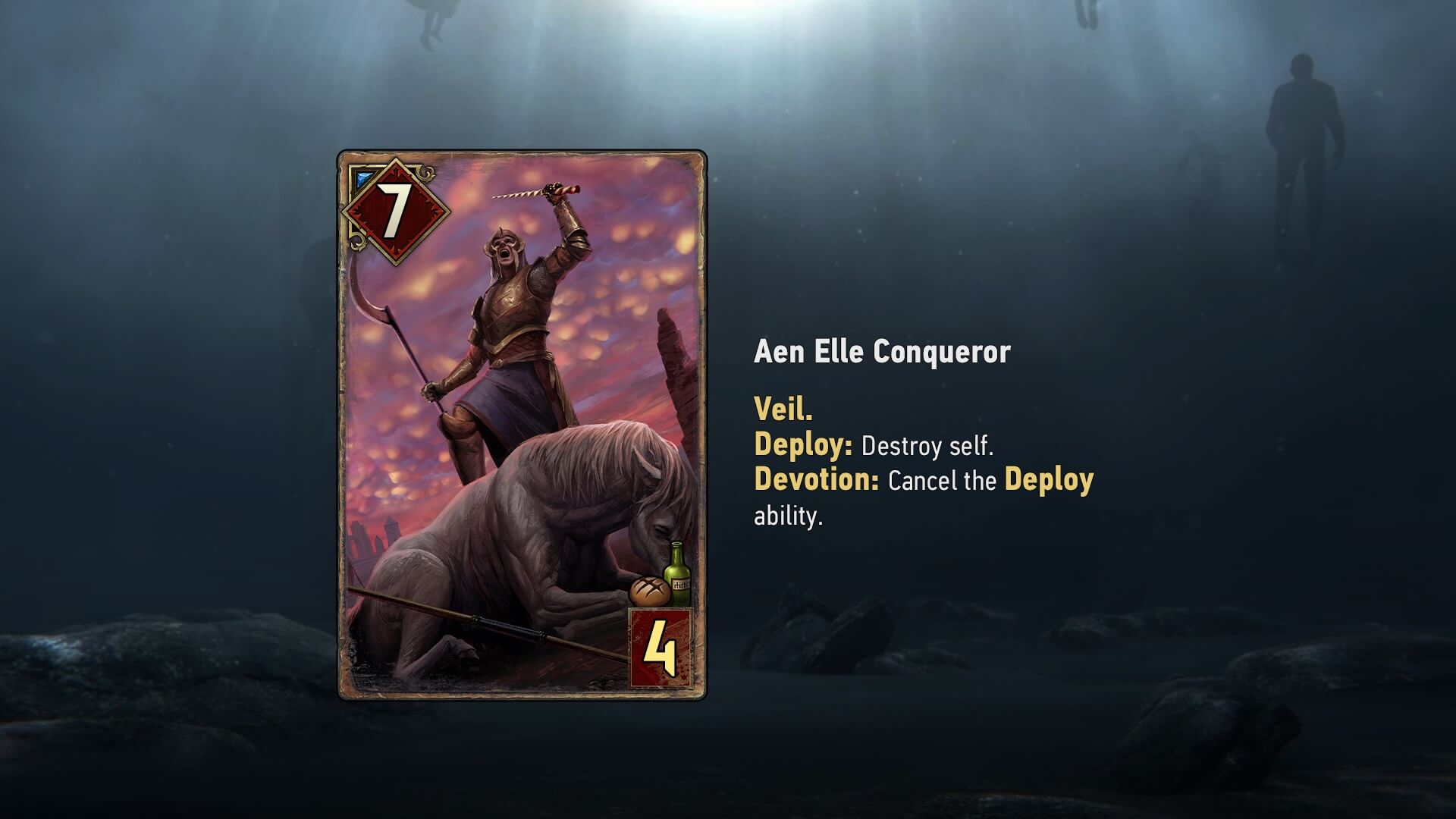 Thank you very much to CDPR for letting us reveal this card. We are looking forward to the expansion and hope there are many more awesome cards like this one to come.