A journey through the Journey - Part 1: Skins and head cosmetics

After the Journey through Geralt’s and Dandelion’s friendship, now it’s Ciri’s turn. Gwent’s second Journey is all about the Lady of Time and Space. Once again it’s filled to the brim with awesome cosmetics: avatars, customisable skins, titles, card backs, coins… A whole reward galore for us to have a look at! However, we will skip the economical rewards of which there are plenty as well and focus on the pretty cosmetics only. The first part is about Ciri’s leader skins and the head cosmetics options. Let’s walk this path together, shall we?

You can click the card names to see their premium versions.
All card art and premiums were taken from The Voice of Gwent.
You can view all the cosmetics on the dedicated Journey page of the official website.

The Ciri skin you unlock upon purchasing the premium pass depicts Ciri as she can be seen in the Witcher 3: Wild Hunt game. In her standard outfit, that is – the alternate outfit with the chain mail is sadly nowhere to be found in the entire Journey, which we consider a missed opportunity.
Luckily, there are plenty of other options available: the next skin to unlock is the Skellige Warrior skin. As we already wrote in our post about a female leader for Skellige, this skin is a good band aid until we finally get a dedicated faction skin. The Skelligan style of armour shows in that skin: Not only does Ciri have a one-handed axe instead of the usual rondel dagger as sidearm, but also if you compare it to Cerys, you can find a similar chequered cloth, a gambeson as main part of the armour only supported by smaller amounts of metal and a wide leather belt. This prioritises mobility over protection and is much lighter than the plate mails of the Northern Realms or the Empire of Nilfgaard.

The same principle is applied to her Witcher skin. Once again not much metal, studded leather and a gambeson offer maximum protection for minimum weight while retaining mobility. A logical approach if you hunt monsters like Armored Arachas, which “[…] can cut half-inch thick metal like a tailor cutting silk” according to its flavour text. This would render plate armour redundant or even a liability and evasion the top priority.
Writing of plate armour: the Nilfgaardian armour is half-plate armour. In contrast to a full plate one, you do not have metal literally everywhere, but leather underneath the non-plated parts. Also have a look at her legs: plates at the front, but open at the back. Not only is this far cheaper than a customised suit of armour, it also reduces its weight significantly. This leads me directly to my next point, as weight reduction is desperately needed as CDPR decided to keep Ciri’s heeled shoes – which they should have not. I can tell you from personal experience that even half-plate armour is awfully heavy, so even the not overly high heels would put an immense stain on the foot. I would have wished for entirely flat boots there. At least there is no infamous ‘booby plate’, as this fantasy-design-nonsense is not only overly sexualised, but also defies the sense of upper body armour as it would direct blows directly to the vulnerable sternum instead of deflecting them.

Ciris final skin has a completely different theme compared to the different ones – and looks absolutely stunning <3. The Lady of Time and Space apparently ended up in feudal Japan and it shows in her (Scarlet) Ronin skin. It was designed after a statuette available in the CDPR fan shop, but don’t get your hopes up: it has been sold out. She wears a traditional kimono (着物) or rather its lighter and more casual summer version, a yukata (浴衣). The yellow one is exactly the one she wears in the statuette version, but a fancier version in red with golden embroidery is available as well. Her footwear is traditional as well: While the tabi (足袋) toe-socks are obvious, it’s much harder to determine the kind of her shoes. My first guess would be zōri (草履) – a round sandal commonly worn together with a kimono. The colour of the straps is not just for aesthetics, but relevant to the occasion where the shoes are worn: A coloured thong or a black one like in Ciri’s case are considered informal, whereas the formal version would have white ones.
However, zōri usually have a flat and rounded sole, unlike these. If you look carefully, Ciri’s shoes have a prong at their top and most likely another one at the back – it would be impossible to walk in them if they had only the front prong, so it is rather safe to assume there is a second one close to the heel. Those prongs are an attribute of geta (下駄), informal everyday shoes. The prongs are meant to keep the yukata off the ground, away from dirt and puddles. There are many sub forms of geta, the ones seen in the skin are most likely Hiyori geta meant to be worn in good weather – as to be expected while also wearing a yukata in summer and not a kimono. It’s really difficult to judge from those mixed signals.
Oh my, read me ramble about shoes. We probably should move on, but that’s what you get when you give me the opportunity to write about shoes and fashion.

The first three cosmetics to unlock here are different hairstyles. The first one, the Lion Cub of Cintra style, is once again the one used in The Witcher 3: Wild Hunt game and consist of a bun and some lose strands of hair. The Skellige Braids style is more complex and most certainly more time consuming to create with not only one, but 4 braids. Ciri’s shaved head is simpler again, even though you probably need some styling gel to keep all the hair at one side. The shaved part looks like a haircut straight from the army’s hairdresser, which does not mean it looks awful – quite the contrary. Such a hairstyle has even been considered in the concept arts for Ciri. It is good to have all those versions to choose from and all of them are practical enough to actually fight with them. If you imagine the swordplay of a Witcher which consists of a lot of pirouettes and spins, it would be a nightmare to fight with open hair or hair covering the eyes.

Unlike a practical hairstyle, a helmet offers actual protection in combat. The helmet available in the Journey looks very similar to the Gjermundbu helmet from the Viking Age which has been discovered among other finds in 1943 in Norway. The Journey helmet consists of the actual spangenhelmet with a mask as face protection and chainmail as neck protection attached to it. There is no visor and the open mouth helps a lot with breathing. A similar helmet, albeit much more fancy in style considering the attached horns, is worn by Harald “The Cripple” An Craite.

The next unlockable is a Ball Mask, most likely carved from exotic wood and painted with gold accents. It only covers the eyes and nose which seems to be a popular style judging by the artwork of Masquerade Ball. Its design is rather plain, there are no plums attached like to Ophelie Van Moorlehem’s mask and it also does not have a more complex overall design like the ball mask of Triss Merigold. I love masks, the added secretiveness and mystery make it such a wonderful accessory. As an added bonus, the mask comes with a very elaborate hairstyle and hair clip: nothing less than a string of pearls and three amethysts hold the braid in place. The hair clip alone must have cost a fortune, but attending a ball is all about showing off your wealth and status after all… But wait: when you wear a mask and nobody can tell who that rich person underneath actually is, what’s the point of bragging in the first place? 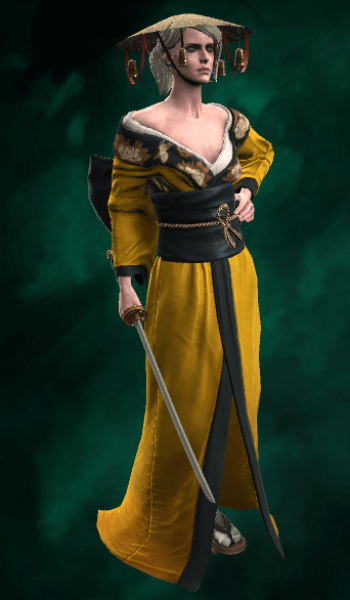 We were quite surprised to see Iorveth’s Bandana as cosmetic for Ciri, as there is not obvious connection between those two. It also leads to the question why we did not get Vernon Roche’s hat as well. Writing of hats:
The Straw Hat can be unlocked by playing 100 games with the (Scarlet) Ronin outfit. A traditional Japanese hat – kasa (笠) – is made from wood or bamboo and usually fastened with a strap underneath the chin. It is meant to protect its wearer from weather while travelling the road, thus it is usually treated with persimmon tree sap (kakashibu) to make it harder and resistant to water, even though the gaps in Ciri’s hat seem to make this rather futile. The circular brim and a flattened tip indicate that this hat version is an ajirogasa, but takin the name of the Ronin skin into account, it should actually be a roningasa (literally Ronin’s hat) – but those would cover the wearer’s face to hide their identity. Also the bells and red ribbons add a ceremonial touch which would not fit a roningasa – all in all it is probably a mixture of many styles and more meant to just look good instead of imitating a certain historical hat. 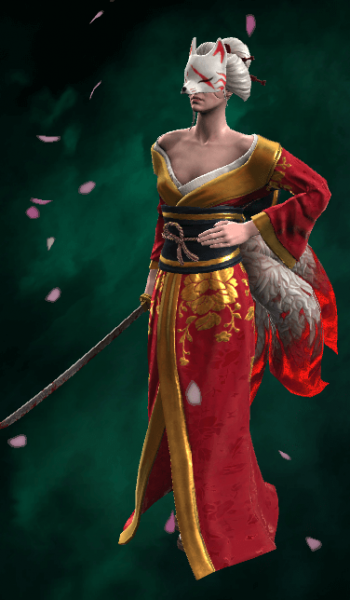 The final unlock of this category is a kitsune half-mask together with a traditional Japanese hairstyle – Nihongami (日本髪) literally means ‘Japanese hair’. There are over a hundred different styles, so we rather do not go into yet another detailed analysis and keep it at this general level. The hair ornaments, however, are worth a more detailed look. In general those ornaments are called Kanzashi (簪) and come in a wide variety from hair pins, over combs to fabric flowers. The ones shown in Ciri’s Japanese hairstyle are Kogai (笄), literally meaning ‘sword’ not only because of their shape, but also because you can remove one end like you would draw a sword from its sheathe in order to place it in your hairstyle. Ciri as Japanese Witcheress still has two ‘swords’, even though none of them seems to be made of silver, but of wood instead.

The half-mask itself is modelled on a kitsune (meaning “fox” in Japanese). Foxes are a common part of Japanese folklore where it appears as a trickster which can be benevolent or malevolent and even is said to have shapeshifting abilities. Foxes are also considered skilled thieves, so better toss a coin to your fox before it takes the initiative into its own paws. There also is a religious aspect to them: In the Shinto religion kitsune are the messenger animals of Inari, the god of fertility, rice and agriculture. Offering some rice at fox statues and wishing for a good harvest season is a common worshipping practice and many people wear kitsune masks on the festivals dedicated to the harvesting season during early autumn. I really want to attend such a festival one day…

This concludes the first part of our journey through the Journey. While you keep raising your Journey level, we shall tend to the second part of our article which will discuss the rest of the cosmetics like Ciri’s weapons, auras, card backs and items for your profile page. Safe travels on your path and see you next time, lovelies!