What a year, lovelies!
Looking back we had quite the ride: Interviews, a card reveal… So much happened and we enjoyed every letter we wrote this year. Sometimes it has been stressful, but the result was even sweeter when we finally published. However, on this last day of 2020 we won’t do anything stressful. We just want you to sit back, have a nice hot drink in front of the fireplace and enjoy that little Midwinter story of the Witcher world Easha wrote for a CDPR contest. Just be careful to not accidentally burn down your Christmas tree if you are too absorbed and forgot about the candles. 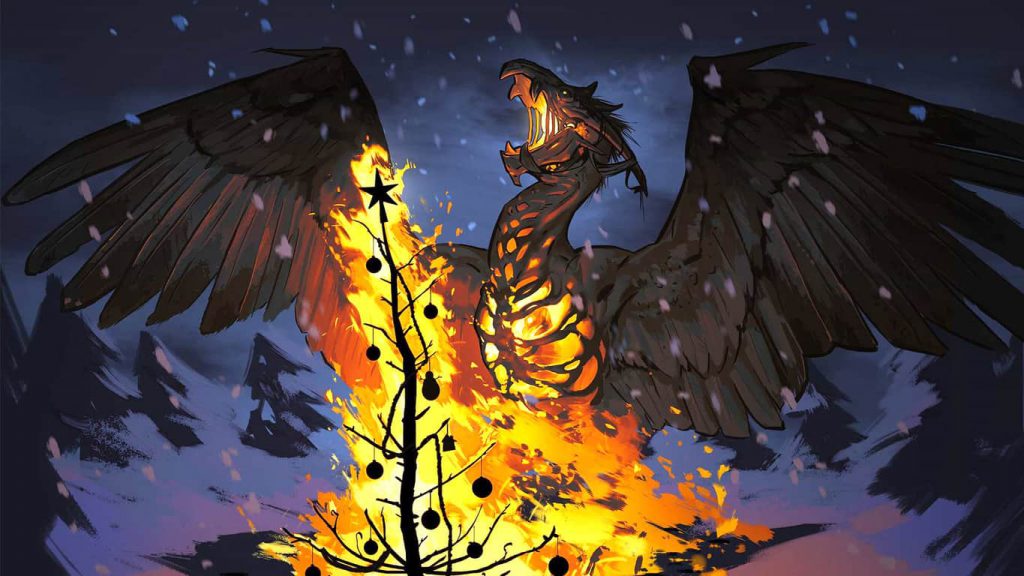 The short story itself takes place in the winter right after the events of  Thronebreaker: The Witcher Tales in the destroyed Northern Realms which suffered from the Nilfgaardian invasion. Quite dire times and unlike you in your comfortable armchair in front of the fireplace, the Northeners here try to survive a harsh winter in their desolate villages. Thankfully it is just a work of fiction, however, The Bridge over the Yaruga was meant to be more than just a bridge of stone over a river and rather be a bridge between old enemies instead.

The Bridge over the Yaruga

The blizzard lasted for three days, and her mother did not allow her to play outside.

This morning, however, the snow sparkled under the rays of the winter sun. The little girl left the preparations of the winter solstice celebrations to her mother and ventured forth to the snow-covered outskirts of the village.
Usually she would have asked the twins next door to play with her, but two months ago – when the first frost came – they fell ill and had no time to play with her anymore. She stopped asking their mother if her friends recovered when she first noticed the tears in the woman’s eyes. The girl had to play alone ever since.

“Kocur? Kocur? Where are you hiding?”
She lost the trail of the old tomcat when he escaped into the ruins of the old barn close to the Yaruga. The girl pouted over the loss of her playmate, but did not give up that easily. During the last two months she had tried to befriend the village’s old stray tomcat to feel less lonely. She somewhat succeeded. At the very least Kocur had stopped hissing at her and even let her pet him once in a while.
Maybe he had escaped to the roof?
The girl carefully climbed the rubble to reach the barn’s second floor. The wooden beams creaked when she reached the first floor. She crawled carefully towards the window and looked outside. The bright sunlight reflected by the snow dazzled her at first, but once she got used to the brightness the girl was stunned: The cold clear winter air allowed a delightful view across the whole village. The snow gently covered the ruins of the buildings destroyed during the Nilfgaardian invasion. The horizon was not ablaze like on the day the Blackclads inflicted war on the kingdom. Her ears were not filled with screams of terror and agony from the villagers, when the invaders abducted the men for slavery or pressured them into their armed forces. The Bridge over the Yaruga wasn’t echoing with the sounds of studded boots.

She spotted a group of men, some of them wearing black armour led by a couple of riders bearing a black banner with a golden sun, marching across it! She knew that banner, it has been part of many of her nightmares. The peaceful mood was drowned in panic and fear as the feelings welled up inside her. Just like back then…

“I am afraid, mum. Who are those black men?”
“Sshhh. It will be alright.” She tried to hide her tears from her daughter.
“But why did daddy have to go with them? I want him to stay! He is my daddy, they cannot take him from me!”
“He will come back. He will definitely come back. Believe in your father. He will come back…”

She needed to warn the villagers.
The little girl got up as fast as she could – Too fast for the old wood already weakened by fire and now burdened with snow. The girl’s scream drowned out in the sound of splintering timber as the barn collapsed.

The officer ordered his unit to stop, as he heard a rumbling noise piercing the silence around them. A scout was sent to investigate its source. He reported back soon after: A child was buried under a destroyed building. The officer spurred his horse, leading his men to the place indicated by the scout. They found a tomcat standing in the remains, meowing at a gap in the heap of ruins. A faint whimper could be heard from beneath, so all the men started to dig with their bare hands, heaved the wooden beams aside until a shock of blond hair appeared.

“That’s my daughter!” An unarmoured man hastened to the rescued child.
“…daddy? DADDY!”
Father and daughter, separated for moths, were finally reunited in a hearty embrace.

The first houses came into sight, but the little girl barely noticed. She was way too excited, chatting with her father and her joyfulness made not only him, but all the men around them smile. Only the dust at her clothes hinted that she had almost been crushed mere minutes ago.
The village seemed abandoned, its only resident was Kocur, who had gone ahead and left his trail in the snow, sitting by the well in the centre of the village square. However, one could still tell that people were hiding inside the houses. Faint clouds of smoke from the hastily extinguished fireplaces were lingering above the roofs.
“Mum! Mum! Daddy is back!”
The door of her home opened and her mother stepped outside. Her eyes widened as she didn’t believe what she was seeing, but disbelief gave way to joy as she caught her child and her husband in her arms. Around them, other villagers left their houses to welcome their long-missed loved ones. Tears were shed – not only tears of joy but also tears of sadness for the ones who did not make it back.

The Nilfgaardian unit which escorted the men back from the Empire to their homes felt somewhat lost at the village square. Even at a distance they could feel the piercing looks and the mix of fear and hatred of the villagers towards them. It hadn’t been that long since the peace treaty which laid down the rules of the prisoner exchange was signed after all.
The little girl approached the Nilfgaardian officer with a beatific smile.
“N’ees tedd a thu”1, he told her as he patted her head reluctantly.
“Thank you for saving me, Mister Tinman!” She presented him one of the straw stars she had folded during the last three days.
He smiled faintly and took the present from the girl.

The villagers around them witnessed this childlike innocence. It was the little girl’s mother who followed her offspring and stepped in front of the officer.
“Thank you for bringing back my husband and saving my daughter.” She clasped his gauntlet with both of her hands and bowed to him.
The villagers and his men behind him alike eyed at the officer. He took in the mood swing by looking in the faces of the people around him. His own men had loosened, tension dropping from their shoulders. The villager’s glimpses showed less hostility – even respect. And yet he could not help but to notice that the peasant’s eyes were sunken, just like their cheeks. Even though they wore winter clothes, he could guess that their bodies were frail as well. The first winter after the war associated with the food shortage had taken a toll on them.

The officer returned to his horse, hesitated for a moment, then opened the saddle bag and took the sack with his rations from it. He put something for the trip home in the saddle bag, but returned with the sack and put it between the villagers and his unit. The Nilfgaardian fumbled around with a flask attached to his belt and threw it into the sack as well before he returned to his soldiers.
He did not say a word.
His look did not even have one ounce of an order in it, and yet all of his men followed his example. They were a small detachment so it wasn’t much, but everyone gave a little. By the end the officer’s provision sack was filled with bread, apples, some cheese and dried meat. The villagers stood by in silence as they watched their former enemies leaving food for them.

Proud of his soldiers the officer mounted his horse.
“Aecáemm aen me, esse’lath seiâ’fyll!“2
The Nilfgaardian soldiers left the village and after about a Furlong the officer could hear the villager’s cheering behind him. He smiled but did not turn around.

The whole family gathered around the decorated fir tree. In addition to the candles and straw stars, one single straw sun adorned the branches.

It was snowing again.

The officer shivered. He was about to reach for his flask to take a sip of schnapps when he remembered giving it to the villagers. Still, he felt similar warmth welling up inside him.

Nilfgaardian translations:
1 I got no time for you.

Glittering Girly Gwent Gaming wishes you a happy new year 2021. May it treat you well and be part of many pleasant memories for you in the future.

And stop making pointless New Year’s resolutions. They won’t last anyway, so rather focus on results than just making plans.